Looking after the Facebook page for a previous church I often get claims via Facebook that copyright has been infringed on some of the live streams we do.

Given that we make sure we follow the rules very carefully it's galling to receive these notices. To be honest more often than not we just ignore them and carry on with our lives. However not and again something comes along which stirs us out of our stupor. A recent video we streamed and posted had part of the audio muted by Facebook because someone had claimed they owned the copyright. Now we definitely have the right to use that piece of work because we have paid for that privelege though the various licences such as PRS, MCPS, LOML etc. However, what caught my eye was who was making this particular claim that we were infrigning their copyright. It was "Hare Krsna TV - ISKCON Desire Tree", Hare Krishnas maybe?. Now these seem to be an Indian outfit and as far as I know they definitely ain't Christian so why in God's name are they claiming copyright on a Christian worship song? The email contents regarding their claim is below. 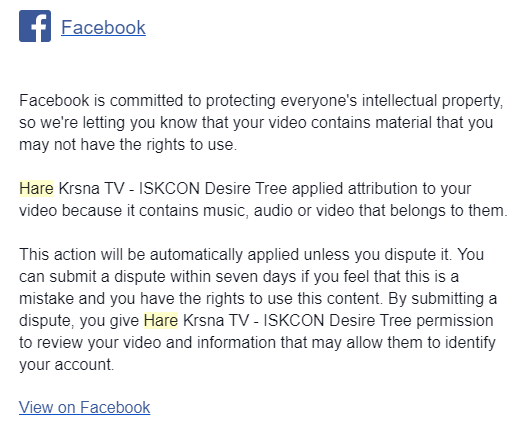 'Audio that belongs to them', I smell a rat here. We know who owns the copyright to that audio and it definitely ain't this Hare Krsna outfit. So we duly replied to Facebook disputing the claim. After about 2 weeks (this was also 2 weeks with  partially muted content on our production btw) Facebook replied saying that Hare Krsna TV - ISKCON Desire Tree accepted our dispute. How very good of them.

So back to smelling the rat. We broadcast something, someone puts in a claim for copyright, we dispute and they then accept our dispute. Which begs the question if they knew they didn't own the copyright then what the hell are they doing attributing our content to themselves? There's also the stuff in the second Facebook email talking about ad revenue. Is this just a scam to get revenue knowing that whatever you claim will likely not be challenged and it might bring in some cash? Is someone putting the 'con' into 'iskcon'?

I smell a scam. Anyone had a similar experience?

I'm someone who came to faith as an adult after a short period of searching for something. I wasn't raised in the church or in any denomination so everything about faith has been new to me. You can read my testimony here.

My family background has been nominal Christian with a strong working class ethos. I tend to have strong moral values but am an economic liberal in the English tradition.

Happily married with 2 dogs, 2 cats and grown up children.